Maha cyclones will gradually weaken along the coast of Gujarat 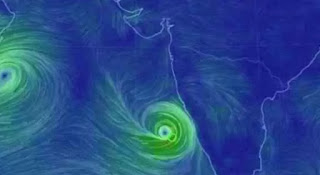 After a while, the name of Maha in the Arabian Sea has become stronger.  However, as the major thunderstorm moves towards Gujarat, the storm will gradually weaken.  So that the hurricanes will not hit Gujarat.  A signal number 2 has been installed along the coast due to hurricanes.  On the 6th and 7th, there will be scattered rains along the coast of South Gujarat and Saurashtra.

Regarding the latest situation, the Jayant Sarkar of the Meteorological Department said that the civilian cyclone is in the Great East Central.  The high storm is currently 540 km from Veraval and 550 km from the lamp.  Its movement will take place in the West North West by November 4.  He will then have a recurring start.

After that his movement will be East-East.  In the next two days, it will be a Civil Cyclonic Storm.  After November 4 it will come to South Gujarat, and will weaken.  It will not cross the coast of Gujarat.  From 6th, coastal rains of South Gujarat and Saurashtra will receive heavy rainfall.  There is no chance that the storm will hit.  Winds of 40 to 50 mph will start from November 5 to November 7.

Departments including Physicians have been on alert mode regarding the demise of the Great Hurricane.  A signal number 2 has been installed at all ports of Gujarat.  Several ports along the coast of Gujarat have instructed the fishermen not to go deep into the sea.  So the fishermen have proposed to move their fishing tackle to a safe place.
By Nanji Mali às 04 November
Email ThisBlogThis!Share to TwitterShare to FacebookShare to Pinterest
Tags Breaking news