The state government has decided to take uniform electricity tariff on agricultural consumption from farmers and farmers of the state. 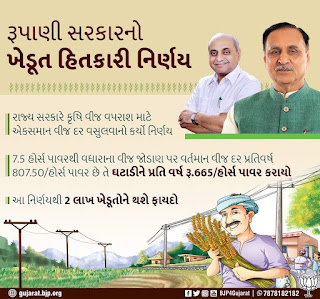 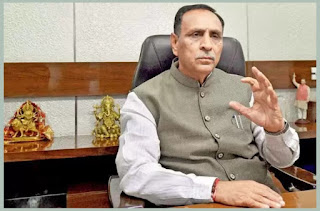 Now, the Chief Minister's Kisan resulted in a decision of Rs. 7.5 / - horsepower and 7.5 horsepower for both.  There will be a power rate of 665 horsepower per year.

In the North Gujarat region, underground water levels are low, farmers have to install an additional horsepower motor to take water deeper for irrigation purposes.

Vijay Rupani gave this electricity rate equal to Rs.  I have made an immediate and immediate decision to recover 665 horsepower per year.

It is important to point out here that the uniform electricity rate per horsepower for such power connections as fixed by the Gujarat Electricity Regulatory Commission is Rs.  2400 per annum from 1st April-2013.

The decision will benefit about 2.5 lakh agricultural power-farmers, with additional power connections, at 7.5 horsepower at present.  The state government has to pay an estimated Rs.  An additional burden of Rs 77 crore will be incurred.
By Nanji Mali às 29 November
Email ThisBlogThis!Share to TwitterShare to FacebookShare to Pinterest
Tags Yojana