Ambalal Patel forecasts monsoon based on Akhatrij winds, know what the signal is


Amidst the outbreak of Corona virus in Gujarat, the atmosphere in some areas changed today.  Areas including Rajkot, Jamnagar and Amreli in Saurashtra received rains.  Bhachau in Kutch also received non-seasonal rains.  Well known meteorologist Ambalal Patel has predicted rainfall.  They have predicted a good monsoon. 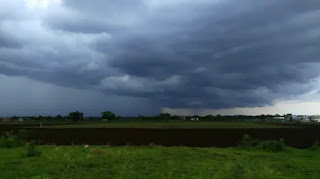 Ambalal Patel has predicted rains, saying that the westerly winds of Akhatrij are a sign of good monsoon.  In addition, they said, the universal monsoon may come late.  Ambalal Patel has also signaled that the hurricane will be active from May 1 to 5.  Hurricanes have been reported to be active in the Bay of Bengal.

The monsoon is also expected to reach Kerala from May 28 to 31.

So today the atmosphere in Saurashtra changed.  Rural areas including Jakandora in Rajkot district, Dhari in Amreli and rural areas in Jamnagar also received non-seasonal rains.  A farmer was also injured in a lightning strike in Jamkandora, Rajkot.  So even in Bhachau of Kutch, there was unseasonal rain.  The meteorological department has forecast rains in Saurashtra and South Gujarat from April 28-29.