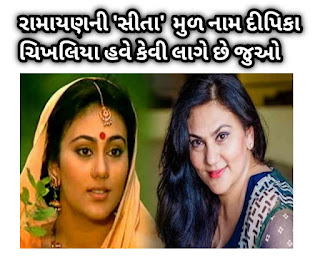 Massive craze has been witnessing the 'Ramayana' series being re-broadcast on television. At the same time he is also very interested in getting to know the artists associated with Ramayana and the various events that have happened to them. Based on this, today we will know about the most favorite scene in the religious series of actress Deepika Chikhaliya, who plays mother Sita in Ramayana.

During an interview, Deepika Chikhaliya revealed about Ramayana's own most favorite and passionate scene and why he liked the scene. Deepika Chikhaliya, who played Prana Reddy in the role of mother Sita, won the hearts of the viewers at that time. He said that the Lord Rama Sita in Ramayana of Ramanand Sagar who abandons Lord Sita is the one who loves him most.

Giving the reason, he said that it was very strangely shown that Sita and Ram face each other in the scene. The emotionally fluctuating scenes show the ups and downs of many emotions that Arun Govil and he played so beautifully.

Even when Mother returns to Ayodhya with Sita Ramachandra, her troubles do not end and many questions are being raised about the character of Sita by the people. Upon hearing of this, Sita urges Mother Ram to renounce her religion and follow the Dharma.