Relief News / Students of Gujarat Government - Big decision for parents, these dates you need to know 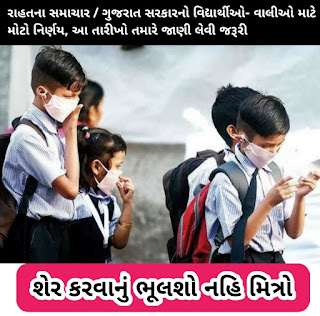 The announcement was made by CMO Secretary Ashwini Kumar about the education world and the supply of food grains. There will be no fee increase in the next academic year. College, University is declared a vacation from April 15 to May 16 by the Government of Gujarat. He also said other important things.

Announcement for school colleges vacation
Information given on grain distribution
Relief news for the guardians of the state
CMO Secretary Ashwini Kumar today announced the important decision of the government for the guardians and students of the state at a press conference. He said there would be no fee increase in the next academic year. Also, the three-month fee from March-April-May can be paid till September. Parents can also pay monthly installments for this fee. He also said that no school can force a guardian to take fees.

This holiday in college, university until May 16

Further, he made another important announcement, saying that the college, university has been given a vacation from April 15 to May 16. It was also stated that exams will be held in the next period from May 18. Further, taking the result of the board examination, he said that the process of scrutiny of Uttar Pradesh will be started from April 16.