Government's big announcement: No August 15 but no school-college will open till this date

school-college will open till this date 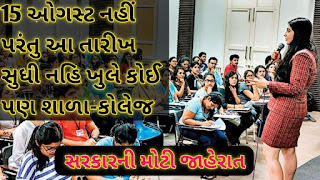 Everything was stalled due to the lockdown amid the current Corona epidemic.  All the people had left work and stayed at home so that the corona would not be transmitted and people would stay healthy.  At the present time, factories and businesses have reopened several months before the unlock.  And people are back to their work.  The big question is when schools and colleges will open at this time.  Then Education Minister Bhupendrasinh Chudasama made an announcement.

Education Minister Bhupendrasinh Chudasama announced the closure of schools and colleges across the state of Gujarat till August 15.  Following the official announcement by the Gujarat State Government, educational institutions will no longer be open till the Independence Day.

Given the current state of the corona virus epidemic, it is likely that schools will not be open until October.  Reports have surfaced that the Ministry of Human Resource Development has decided not to reopen the schools until October after discussions with health experts, although no official statement has been released by either the government or the ministry.

The Ministry of Human Resource Development is currently emphasizing the need to encourage online study due to the Corona epidemic.  Schools have been instructed to start online classes as well as to engage students.  The ministry had earlier said that the schools would be opened by August.

Currently, cases of corona virus are increasing very fast in Delhi, Gujarat, Maharashtra and some other states.  In the midst of this situation, the ministry has now given indications that schools will not be reopened until October.  It is reported that this decision is being taken for the health of the students and to prevent the spread of coronavirus.  Efforts are also being made to ensure that the future of the students is not ruined and that they also get proper online education.  In the midst of this situation, online studies have been started in Kendriya Vidyalayas as per the order issued by the ministry.  In the meantime, the task of preparing notes etc. has also been entrusted.

Currently, cases are on the rise in Delhi, prompting the state government to decide not to open schools in Delhi till July 31.  The announcement was made by Deputy Chief Minister Manish Sisodia.  He said that the Delhi government was considering a 50 per cent reduction in the curriculum for students so that the burden on students could be eased.  The government is also involving the parents of the students and taking their opinion on the whole situation.
By Nanji Mali às 28 June
Email ThisBlogThis!Share to TwitterShare to FacebookShare to Pinterest