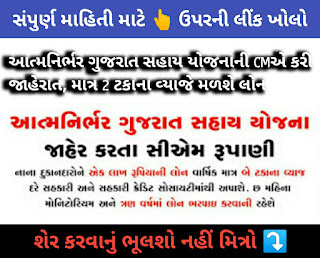 Following the economic challenge posed by the lockdown and Corona, the Gujarat government today announced Part 2 of the Self-Reliant Gujarat Assistance Scheme.  Under the Rs 5,000 crore relief scheme, the government will provide loans of up to Rs 1.5 lakh to small traders as well as other middle-income earners at an interest rate of 4 per cent without any guarantee.

The government had earlier announced concessional loans of up to Rs 1 lakh to low-income small shopkeepers, artisans and others, the distribution of which was started in co-operative banks and people lined up to take it.
Under Self Help Scheme-1 Rs.

People from all over Gujarat had lined up at the co-operative banks to get loan forms at two per cent interest up to Rs 1 lakh, but most of them returned to Villa Mo without getting the forms.  In Ahmedabad, a number of cooperative banks including Gujarat State Cooperative Bank and Ahmedabad District Cooperative Bank have Rs.  Thousands of people lined up to get loans of up to Rs 1 lakh, but could not get forms from many co-operative banks.  It was also learned that some banks had given out computer prints to them as the forms were not printed due to the lockdown.

There were small lines in different parts of Gujarat to take the form.  But the form could not be found.  On the other hand, to make small traders self-reliant, the government has taken a stand not to give six per cent interest subsidy to co-operative banks if they do not pay regular installments.  Is gone.  Loan installments given to small men are likely to not be paid regularly.  In these circumstances, if the government does not provide six per cent interest subsidy to the banks, they may lose capital as well as interest subsidy.

Loans for the co-operative sector can be difficult for you as there is a provision in the GR of the Gujarat government on the issue of non-payment of interest subsidy to non-payers.  A number of banks could not provide the forms to those who went to take loans to one lakh small artisans as the forms were not printed.  There are also reports that some banks have prepared the form on computer and printed it out and given it to the applicants.  It is learned that only Ahmedabad District Cooperative Bank was able to provide this form.  Second, the artisans gave them Rs.  They are coming to take the form with the misconception of getting financial assistance up to Rs 1 lakh.
Important link
ગુજરાતમાં માહિતી માટે