Why is this elephant carcass going viral on social media ..? Read in detail

Why is this elephant carcass going viral on social media. 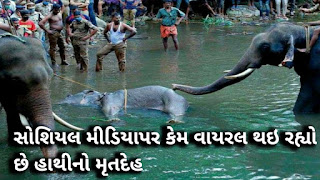 The carcass of this Kerala elephant is going viral on social media. This is the case in Palakkad district of Kerala. A pregnant elephant from the dense forests of Kerala's Palakkad district came to a residential area in search of food where she ate a pineapple full of firecrackers and was seriously injured when it exploded in her jaw and died in the river. After this photo went viral on social media, many people expressed their grief with emotion and many people are blaming the perpetrators. Hathani was pregnant in this heart-wrenching incident in which a photo showing a dead baby in the womb after the postmortem of Hathani has gone viral. People also paid homage to Hathni and her cub by posting photos in their social media stories.

Elephants are very common in the forests of Kerala
Sometimes these elephants roam the residential areas of the village in search of food. The people of these villages make these types of pineapple bombs to protect the crops grown in the fields from the harassment of wild boars. But it is a pity that elephants are the victims of this pineapple bomb. This is the second such incident to come to light after it went viral on social media, in which an elephant died after eating a similar pineapple in Kollam district in April. Kerala Chief Minister Pinarayi Vijayan held a press conference and announced stern action against the culprits. They said forest department officials are investigating and the culprit will be caught soon.

Forest Officer Mohan Krishnan, citing the April incident, posted an emotional post on his Facebook and a photo of Hathni's tomb, saying, "We saw Hathni standing in the river and dipping her head in the water." Her Sixth Sense told her she would die now. She was standing in the river taking a bath. Krishnan also tried to bring the elephant to shore.

Farmers' standing crops are being damaged by many wild animals all over the country. Farmers try new alchemy to protect their crops. Lions, elephants, panthers and tigers are the victims of such alchemy of farmers. Both the farmers and the government are responsible for every incident. The government should make proper arrangements for fencing to protect the farms in the forest area and the farmers should also understand their responsibilities and be kind to the animals.

If you liked the article, you can share it between social media and your friends.
By Nanji Mali às 06 June
Email ThisBlogThis!Share to TwitterShare to FacebookShare to Pinterest
Tags Breaking news
Newer Post Older Post Home